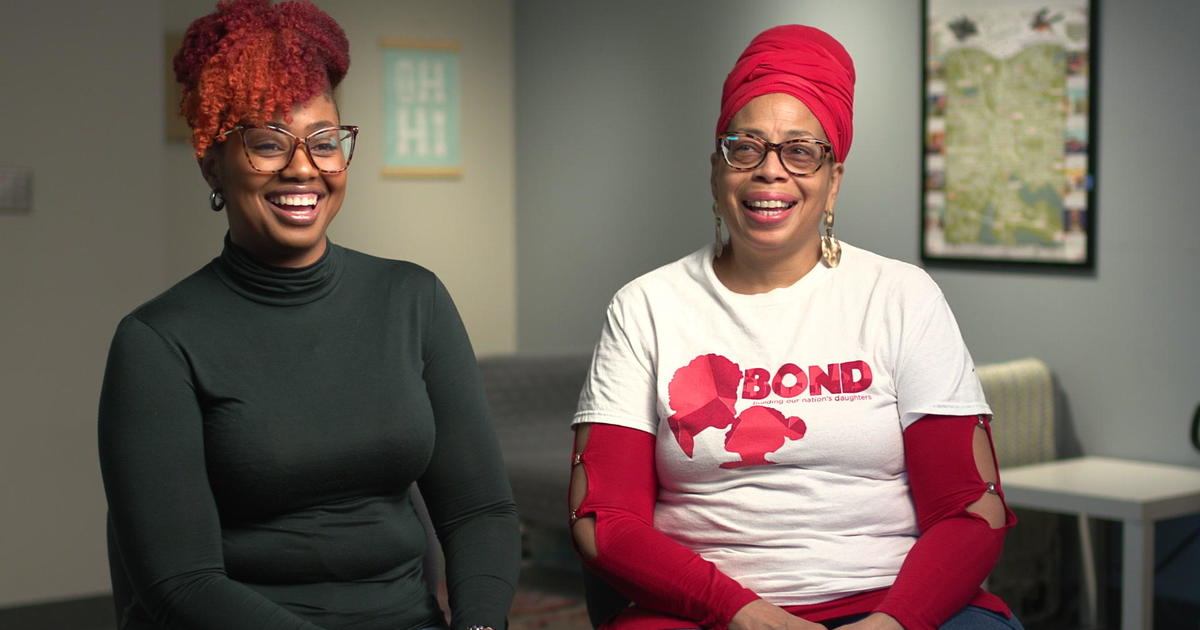 Baltimore — One Saturday morning, a group of mothers and daughters gathered at a round table, their eyes closed. “Pay attention to the feeling of your breath,” said Ateira Griffin, leader of the group. “Consider something for yourself and for your mother-daughter relationship.”

This future-visioning exercise is just the beginning of the growth of BOND, a Baltimore-based nonprofit that serves single mothers of color and their daughters.

Griffin, founder and CEO of BOND, also grew up in a household where her mother and grandmother were both single mothers. But it wasn’t until she became dean of students at the Baltimore Leadership School for Young Women that she began to notice a trend.

“One of the greatest joys I’ve had has been talking to my daughters,” Griffin recounted. “They were telling me everything they were going through. All the ups and downs, the challenges… And I had to ask them, you know, did you tell your mom or your mother figure? And the answers I had, they said, “No. We don’t have that kind of relationship. No, I don’t want to put anything else on his plate. I don’t want to be a burden.”

On the other hand, mothers also started approaching him, asking Griffin, “‘Can you help me with my relationship with my daughter?’ … or ‘Can you help me fill out this job application? Can you help me get through the line to housing or social services?’”

“And so those things weighed on me,” Griffin said.

Unable to find an existing program that would help meet these multi-generational demands in a holistic way, Griffin launched BOND in 2015 with the help of her own mother and senior advisor, Alisa Williams.

“It’s great fun. It’s interesting. I can grow with her,” Williams said, adding with a laugh, “and then there are challenges because I have my own personality. She has her own personality. “

According to the Pew Research Center, the United States has the highest rate in the world of children living in single-parent families. For families headed by single mothers, it could also mean a higher risk of poverty and additional stressors that have a ripple effect on children.

In addition to mentoring programs that focus on socio-emotional needs, BOND also offers a financial wellness program designed by and for Black women. Griffin said more than two-thirds of BOND mothers have been able to raise their salary by a tax bracket.

At meetings, mothers like Tyeisha Johnson and her daughter, Akira, find a safe space to be intentional and share goals with each other.

“We’ve always had a pretty close relationship because it’s just her and me. But since I was going to college, I had to find a part-time job. So that was a way for us to have that dedicated time doing specific activities,” Johnson explained.

“The activities we do together help us get to know each other better. Or just learn new things that we didn’t know before,” Akira added. “I’m proud of her because she works hard…and she tries her best to do everything she can.”

Griffin said meeting the needs of these families with a multi-generational approach “gives us the opportunity to have an exponential impact.”

“One of the biggest things I see is just this new open and very clear communication between mothers and daughters that also includes language around our emotions and mental health,” Griffin said. “We don’t have the privilege of talking about our emotions all the time in the black community and as black women.”

One of BOND’s goals is to change the narrative surrounding single mothers.

“There are so many stereotypes,” Griffin said. “And I’ve seen it broken time and time again, from my mother to my grandmother to some of my friends – like they’re phenomenal. They are strong. They are some of the most persistent, loving, and generous people I know in my life. And I have so much respect for them. Sorry, I’m getting emotional.”

“Yeah, some of them are trailblazers. They just go places,” Williams added.

But to change the conversation, they said it needed to expand beyond the courage of these families, to ensuring that people with these lived experiences are in positions of leadership and power.

“Their voices — that’s what can guide policy changes like paid vacations… We’re talking about housing policies that need to change. Raise the living wage across the country,” Griffin said. “We need to work on these very specific policies that directly impact single mothers of color. And that’s how we’re changing the narrative as well.”

With this, BOND hopes to continue the mission of what its name stands for: Building Our Nation’s Daughters.

Pandemic Bankruptcy Battles: Looking Back and Beyond | Epic