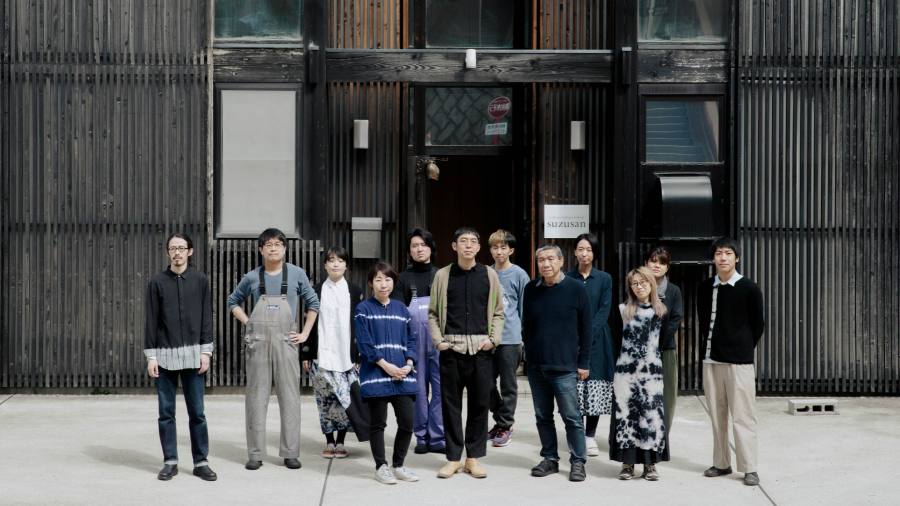 Hiroyuki Murase grew up surrounded by shibori, one of the country’s oldest dyeing techniques dating back to the 8th century. His hometown, Arimatsu, was and still is considered the country’s shibori hub: much of the intricate process of pattern binding and tie-dyeing was done in kitchens and family living rooms where children like Murase ate. their dinners and did their homework.

Before World War II, Murase’s father, Hiroshi, estimated that there were over 10,000 shibori craftsmen in Japan. By 2008, when Murase decided to carry on his family’s century-old legacy, the number had fallen to less than 200. Post-war industrialization and globalization dampened demand for traditional crafts, while young people graduates aimed for stable jobs in companies. At some point, despite being in his late 50s, Murase’s father became the youngest shibori craftsman in town.

“Everyone in the village thought there was no future for shibori, that there wouldn’t be a next generation,” says Murase. Not only were artisans aging and the culture of wearing traditional clothing like yukata and kimono declining, but each family had its own unique design – a kind of crest – and each time a family stopped, a technique was lost. The fact that Hiroshi’s textiles were used by local luxury brands like Yohji Yamamoto, Comme des Garçons and Issey Miyake did little to ease the sense of foreboding; much of the activity was wholesale.

More than a decade later, Murase’s business took an unexpected turn. His own brand Suzusan, launched in 2008 as a luxury fashion and homewares brand aimed at giving craftsmanship and his family business a new direction, has attracted retailers such as Farfetch and Japanese department store Isetan. and Takashimaya.

Suzusan – which offers bright and luxurious cashmere and cotton pieces in relaxed silhouettes – is appealing to a new generation of designers. The youngest employee, Ryoga Ota, who joined the brand in 2020, is just 18; the average age of the Japanese team is 35 years old. With the help of these members, Murase – who is now based in Dusseldorf – draws shibori patterns on his iPad for Arimatsu employees to use as guides, saving him the hassle of going back and forth. Germany and Japan. “I started the brand because I wanted to pass the tradition on to the next generation, before it died out,” says Murase. He now believes he has achieved that goal.

Murase attributes the growing interest to growing disillusionment with the corporate world and young people’s desire to live more balanced and meaningful lives. “People in Japan thought that if you worked for Sony, Panasonic, Toyota, you could work there until you were 65…that your life was safe,” he adds. “But during the pandemic, we’ve seen huge companies go bankrupt…past definitions of success don’t mean anything anymore.”

One of Suzusan’s employees, Noriyoshi Yamauchi, joined the brand after leaving a major automaker. Her story aligns with the studies of Susanne Klien, an associate professor of modern Japanese studies at Hokkaido University, who for more than a decade has watched young Japanese leave the big cities to live quieter lives in rural towns. The country’s Ministry of Internal Affairs and Communications found that more than 400,000 people left Tokyo in 2020. Klien said: “[The pandemic] really pushed people who were thinking about it to adopt a different way of life. It’s a paradigm shift.

In his book 2020 Urban migrants in rural JapanKlien spoke to a number of people who had “broken their bodies” (karada wo kowashitalisten)) and suffered from mental breakdowns before moving or retiring from a lifelong office job. Despite her college and graduate degrees, she found that many of her subjects explored more creative and challenging work options, joined companies or began internships, and often held multiple jobs at once.

At present, young people fleeing corporate norms and city life are still in the minority. Still, says Klien: “Some people reject it and say everyone will eventually go back to Tokyo, but I don’t think so.” The availability of remote work and the fact that the government is trying to decentralize its population in the event of natural disasters suggest that the patterns that begin now will be felt in the long term.

For Murase, this change has rejuvenated its workforce and the way they work; he notes that other small family businesses in the area, producing Urushi lacquerware and Owari Shippo enamels, have also benefited from an influx of young recruits.

Shoppers, too, are turning to traditionally made or handmade items, says Hirofumi Kurino, co-founder and creative adviser of Japanese retail group United Arrows. “If they see [traces] craftsmanship or craftsmanship, our customers love it. Kurino sees the growing appeal of unique, well-designed slow fashion as an example of what he calls the world of “post-luxury” consumerism.

The term is not limited to objects of traditional manufacture. “Post-luxury is more human, more honest, more raw, more naked,” says Kurino. A major element is the growing awareness around sustainability, including the dangers of mass production and overconsumption. Unlike many countries around the world where small artisan businesses have largely been wiped out, Japan still has an active infrastructure of artisans and businesses to keep up with demand.

Now that Murase is attracting younger employees, he’s focused on helping them learn shibori, which can take up to a decade to master. But despite declining interest in stable, lifelong employment, Murase isn’t worried about staff working at Suzusan for shorter periods. “I often tell my employees that they don’t have to stay with one company. They are free to choose their own life.